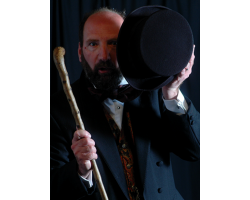 Mr Dickens is Coming! On Demand

Mr. Dickens is Coming! is a new virtual play, which delves deep into the private life of Charles Dickens. Performed with incredible energy and style by Gerald Dickens, himself the great-great-great grandson of the author, and set within the historic London home of Charles Dickens, Gerald brings you a light-hearted performance of some of the key moments in Dickens’s life; the highs and the lows, the funny and the tragic, and captures how these moments ended up in his famous novels.

Featuring performance pieces from David Copperfield, Oliver Twist, A Christmas Carol and more, as well as quotes and scenes from Dickens’s private letters and conversations, Mr. Dickens is Coming! captures the drama, the comedy, the passion and the sheer ingenuity which formed the life of Charles Dickens.

Gerald Dickens is an actor, writer and producer, who has been performing Dickensian shows since 1994. Mr. Dickens is Coming! is a highly popular, long running play, which has been adapted to virtual form and filmed within the museum. But above all, whether you're a Dickens scholar or someone who has hardly heard of the man, it’s a highly entertaining watch!

DigiTickets
How can we help?

I'm having trouble with my purchase!

Tell me more about DigiTickets!

We also collect analytics data to help make improvements by measuring how the website is used. If you are happy to be included in this data please agree below.